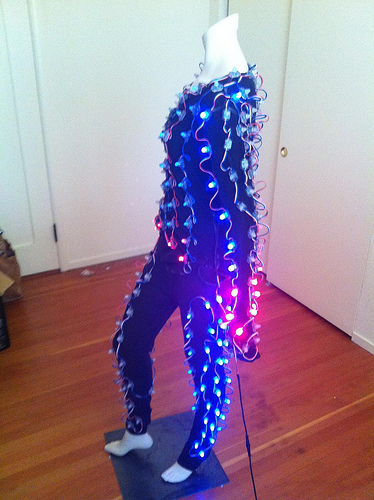 (Here is a link to video)

People have started to wear lights as a form of fashion. Like most fashion it is used to accentuate parts of the body. This essay discusses the work that we did building a light suit and wearing it to Burning Man 2011, the reactions we got, the technical challenges and some of our observations on the topic.

Any circa 2011 lightsuit is by necessity a crude approximation of future fashion. By 2012 this kind of technology will be common. By 2020 there will no longer be any novelty to embedded lights in one’s attire. (ways that lights will be incorporated into clothes- fashion (decorative, trends), sport (measurement, protection), utility( safefty, alerts), functional(social, intimate notifications)

Nevertheless our early work is likely in line with future perceptions of similar technology.

A light suit is in a sense a vulgarity – like smearing makeup all over your body as a means to gauge the cultural response to adornment. It explores fashion in the same crude way that the Linear Hadron Collider explores the sub-atomic universe; by the brute force smashing of things together and seeing what spins out.

There is a Donna Haraway moment in this as well. Why wrap myself up in lights? What is it about some new technological artifact that makes me ( and others ) want to roll in it? The suit is a text – the lights sequence patterns and communicate. There are a series of statements made both explicit and implicit. Statements about identity, how I define and see myself, how others respond. How ego and simian preening are folded together by a new technical fetish. 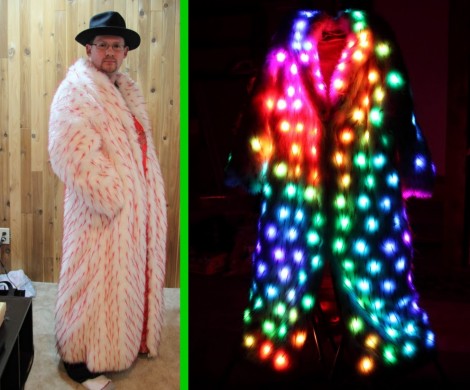 There is a deep seated somewhat unconscious appeal to covering oneself with lights – it’s as if the body is a text and one is forming a critical interpretation of the body. It’s a kind of exegesis – trying to draw out an understanding ; by necessity a reduction of the real to a simplified truth. What makes this most interesting is that it says more unintended things than intended things. It says a lot about identity, pride, self. It speaks to our simian nature and ego. It’s almost a hopelessly naive conflation of technology with self – almost a cargo culting of technology – as if one is somehow faster, better, more desirable, fertile – because of a techno fetishistic sheathing. It speaks to a desire to please as well. And it speaks to a body dimorphism – this arms length cultural stance we have with respect to our bodies in the modern age.

Even the quantity and placement of lights is in question; should one emphasize the genitalia? Should one emphasize the gross musculature; calves biceps chest? Should the lighting itself reflect a gender neutral body or should it be masculine or feminine? Lighting clearly becomes fashion – as a way to bend representation. In the truest sense it is bling; if lights are a currency of the Burning Man culture then more lights is more wealth.

It turns out that placing lights closely on the body is an intersection of studies in anatomy with limits of the lights wiring hardware and trying to manage the complexity of mapping the lights to software.

Paige acted as a model for the suit. She was rigged in a black unitard with white circles used to mark the light placements.

In defining exactly where the lights were going to be placed many specific issues arose with respect to lighting budgets, light distribution, physical comfort. We had to develop an improved vocabulary of the human body in order to specifically be able to communicate and express which parts of the body we were referring to ( the arm? or the upper arm? the upper arm front or the upper arm back? ). 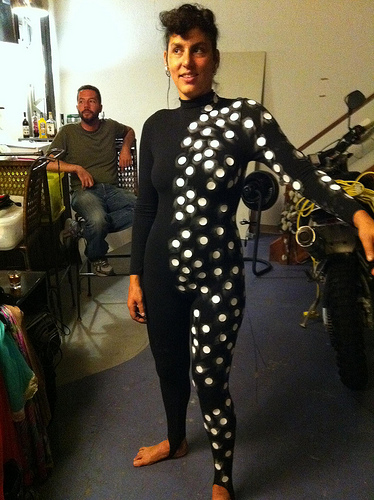 We also had physical hardware limits such as cable strand lengths which interacted with our ideal placement patterns – such that the ultimate lighting placement was a compromise between physical limits and design aspirations.

Since the light budgets were limited the lights could be placed randomly or be placed to accentuate body features. The latter method was chosen – but then this required an artistic interpretation; sketches and working with a human model to decide on light placement. The act of wrapping a human with a limited light budget became a kind of game – not dissimilar from http://zenbound.com – and it was reminiscent of bondage and binding in general. The body yields to a form of control that inhibits its freedom by degrees in either increasingly pleasurable and or painful ways.

I worked out an initial plan with very specific lighting budget placements. Ultimately I had to simplify and revise this plan to always group limbs or sections into blocks of 50 ( since the lights came in groups of 50 ).  Here were my original budgets and design goals

I had to simplify and get things tractable fast – my revised plan was: 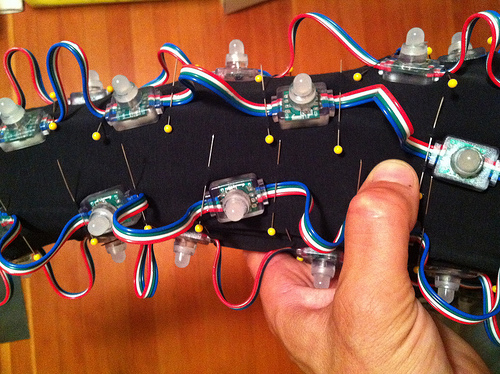 How this all came about was a series of happy accidents.

In late July Mike Winter and Will Wright from Stupid Fun Club dropped by our offices at Parc to see what we were doing with Augmented Reality. It was a pleasure to show them around and Mike extended an invitation for us to come up and visit them. I took advantage of this and came to check out their lab – and in doing so I heard that they were doing a lighting project for Burning Man. I definitely wanted something to do ( rather than just consume ) so I dropped by the http://coolneon.com office in early August to see the project – the Serpent Twins. Turns out they had just got a new lighting product which they called “Total Control Lighting” and it seemed like they were having a lot of fun with it. 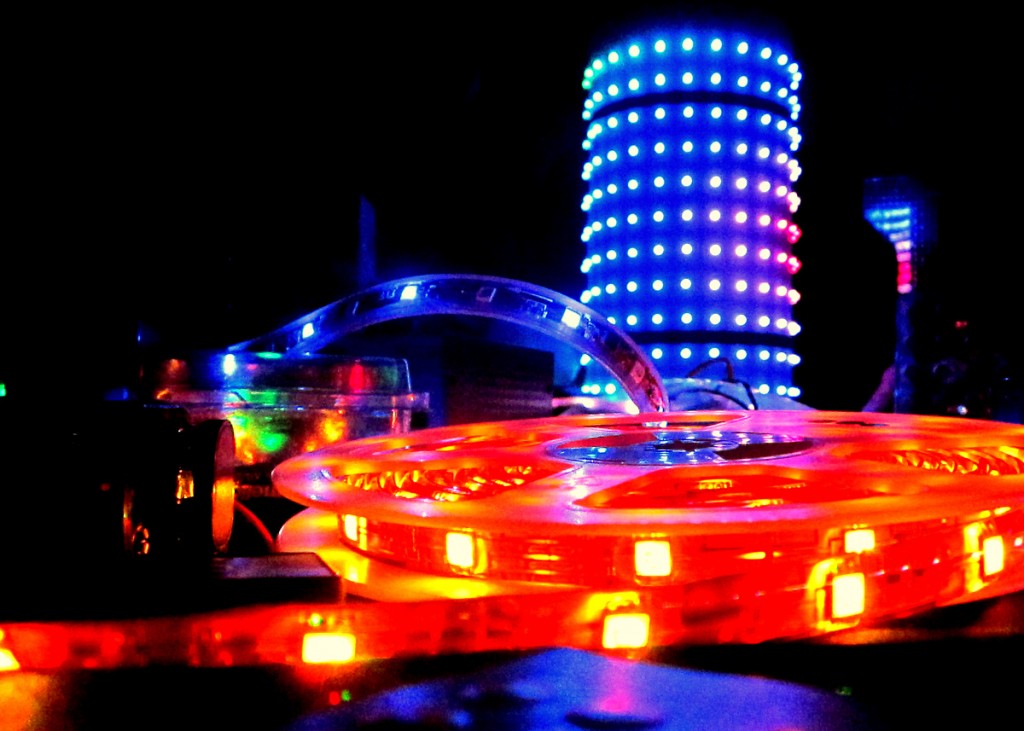 Learning just enough about the Arduino I managed to get started on something that very first evening. Doing a suit seemed like the obvious simple thing to do – it was my first thought. From there it was simply an issue of working through software, budget, hardware and power management issues. I went through two entire suit revisions but all in all it was quite manageable. Possibly the biggest risk and most time consuming portion was simply physical light placement and attachment to the suit – more so than software or power management considerations. It could easily have been an out of control project in that I didn’t know until the last day if everything was going to work – but everything did seem to work well. I really have to thank Benjamin and Mike for their help in answering simple questions I had which otherwise would have been big roadblocks for me. 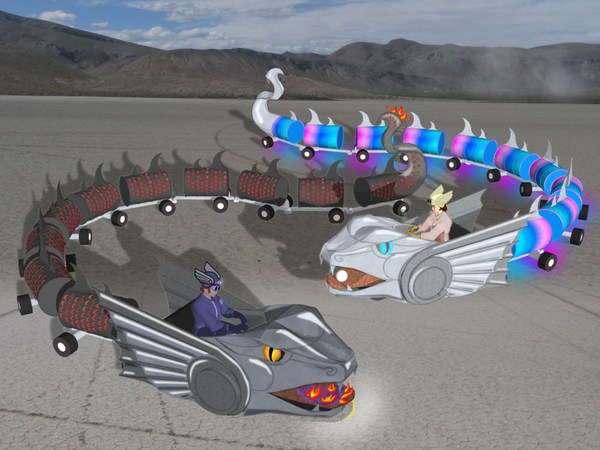 The hardware I started using is the

I changed to a Seeeduino and I bought a 6V 5amp battery ( for an RC car ). To power the lights directly ( not via the arduino ) I basically tap out the Red and Blue cables for power where Red is +5V and Blue is ground. Apparently it is important to make sure there is a common ground between the Arduino and Light Strands. See:

This plan was obsoleted by the severe memory limits of the Arduino. I’d like to bring it back to the foreground if I go with a more powerful computer such as an iPhone.

Ultimately I felt that my effects were moving objects – so I thought I would have a base class that embodied basic physics; momentum, inertia, friction, position and suchlike. Then subclasses could introduce variations. The effects engine therefore is like a particle effects engine .

The source code for the suit is at http://github.com/anselm/lightsuit .

I decided to treat the skin as a 2d bitmap and built an adjacency graph of the light positions.

I only have one effects loop that visits every single pixel in the display once and each effect can act on that pixel at that time if it wishes… this is the inverse of the normal reasoning but for effects that are global it is fastest.

Each effect was an independent pre-canned animation sequence which I composited together onto the suit.

Each effect is totally custom and no state is shared – there is no chaining or fancy effects support.

No effects are animated movies – all effects are dynamically procedurally generated. It would be nice to run movies also later.

The Arduino is limited for small app development – it would be far better just to use an ordinary cellphone by some measures – it is very slow, very little RAM, no sensors. An iPhone by comparison has all kinds of sensors built in, tons of ram, lots of user interface capabilities. If I could hook up an iPhone to the SPI interface for driving the Light Strands that would be more ideal.

I rapidly hit memory and speed issues and had to re-structure my application as a result – in particular the color mapping table of the lights to an actual 3d position had to be optimized. Rather than generating the light placements by literally drawing strands to memory I ended up having a static 2d color lighting map for. It was a more elegant solution but less configurable.

I also can only handle 300 lights in the current RAM configuration – so this has meant I will not include a hood in this design.

I had switched to a Duemilanove Arduino but switched back to a Seeeduino for speed and performance ( having to debug some issues with the Seeeduino more carefully ).

I think this took about 10 days full time to build including software.

The LED’s can be set from 0 to 255 in brightness but this is not an even distribution across the human eye in terms of perceived brightness. For performance reasons I didn’t end up using this translation table but for future reference I’ve included it here.

See this link for more details:

A few things I’d like to do in the future:

My own experiences wearing the suit:

Overall, superficially, it was quite a bit of good clean fun – and while wearing it I definitely felt like I was contributing to Burning Man – not just consuming. At the same time it was a lot of work – it was heavy, and tiring and in a sense a job not just play. It was also wonderful running into other people with similar projects in various stages of completion and sharing our interest in the whole idea. I think most people saw the humor in it – the cartoonish aspect of being over the top with the number of lights – and it was fun making people smile.

Many other people helped out with time, materials, support and ideas as well including Nifer Fahrion, Jason Wilson, Chacha Sikes, Diann Eisnor, Meredith Andrews, Todd Huffman for letting me store it in his air-conditioned trailer at Burning Man. Their support and help also helped make this work a success. My employer Parc was gracious in supporting time off for showing the suit at Burning Man 2011 as well.